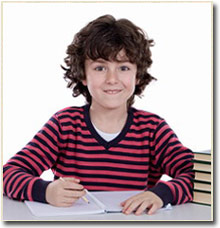 Stephen’s parents asked to meet with the EAP to discuss their son’s behavior. During the appointment, the 8-year-old was enthusiastic as he touched and knocked over most everything in the office. His difficulty in remaining focused, his impulsivity and the history his parents provided seemed to point to the fact that Stephen’s problems stemmed from Attention-deficit hyperactivity disorder (ADHD).

The word “hyperactive” calls to mind a child who operates in overdrive, pushing parents and teachers to the brink of insanity. Such a child appears distracted by every little thing, never learning from his mistakes. He acts without thinking resulting in many accidents and reprimands. A child with ADHD disregards rules, even when they are repeatedly punished. Perhaps you know a child like this – it may even be your child.

ADHD is one of the most prevalent childhood health concerns, affecting between three and five percent of children. Even though it is so common, it is one of the most misunderstood problems and has caused both parents and children much needless pain and guilt. Sadly, parents of ADHD children are more likely to find criticism and rejection than support and help.

The first time it was identified was around the turn of this century by Dr. George Still who called it a “defect in moral control” and “volitional inhibition.” Prior to this description, one German physician wrote a children’s story in 1848 about “Fidgety Phil.” Because of the development of our understanding of brain physiology, following World War II it came to be known as “Post-encephalitic Behavioral Disorder” and eventually “Minimal Brain Dysfunction.” In the sixties, hyperactivity became the focus, and in the seventies attention problems became the primary target of research.

There are three primary features associated with this disability (inattention, hyperactivity, and impulsivity) based on a set of 18 symptoms. Not all the criteria or symptoms are necessary for the child to be diagnosed with ADHD; however, not all children who meet these criteria have ADHD. There are several important qualifiers that are frequently overlooked, and this is a primary reason that ADHD is overdiagnosed.

First, it must be present before age seven since developmental problems are evident at an early age. Second, the symptoms must be present in more than one situation. If a child does well in most situations but does not pay attention in a particular setting, ADHD is probably not the cause. The nature of the disorder will affect the child’s ability to manage impulses and sustain attention in most settings where attention requires effort. Playing video games, working on the computer, or watching television are highly stimulating activities and therefore do not force the brain’s attention. Thus, the ADHD child’s ability to stay with these and similar tasks are not proof that the child does not have this problem. Third, the child must have significant impairment of his functioning. We all exhibit signs of ADHD at some time or another, but to truly be ADHD the interference must be significant.

Finally, the symptoms are not explainable by any other disorder. For example, children with learning disorders often struggle to put their minds to work on tasks that are simply more difficult for them. Inattention is also a common symptom of anxiety and depression. Anxious or traumatized children often demonstrate hypervigilance, which can be mistaken for distractibility. Children from chaotic families may not have learned the self-control needed to attend in structured classrooms or may be acting out their emotional pain. It follows that a thorough evaluation is necessary before diagnosing a child with ADHD, especially as one or more of these other conditions may – and often do – coexist with ADHD. In essence, ADHD creates a slope in the playing field for some children. This differences makes controlling impulses and following rules more of a challenge than it is for their peers.

Good question. No one knows exactly what causes ADHD, evidence suggests that it is genetically transmitted and results from a chemical imbalance or deficiency in certain brain neurotransmitters, the chemicals that help the brain regulate behavior. ADHD is more a problem of “output” than “input;” individuals with ADHD know what they should or should not do, but their impulsivity, poor response inhibition and inability to delay responses lead them to do otherwise.

Research has located the disorder in an area of the brain called the orbital-frontal region, along with some of its neural connections to other parts of the brain, particularly the right hemisphere. The frontal lobe serves as a manager for activities in the brain, keeping it focused on particular tasks and determining their importance. This developmental disability inhibits the child’s ability to regulate and organize his behavior and to understand the consequences of his actions.

What Can You Do?

Raising any child is difficult, but the burden seems overwhelming when our child fails to respond to normal approaches. Most features of ADHD will not be outgrown without help. Therefore, left untreated ADHD disrupts a child’s life and can result in low self-esteem, poor grades, and social and emotional problems.
If you need help in dealing with your child’s behavior:

Dr. John C. Thomas is a licensed professional counselor and certified substance abuse counselor. He is a Professor at Liberty University and holds two Doctor of Philosophy degrees. Dr. Thomas has published four books, numerous articles, and has been featured in a national and local media.